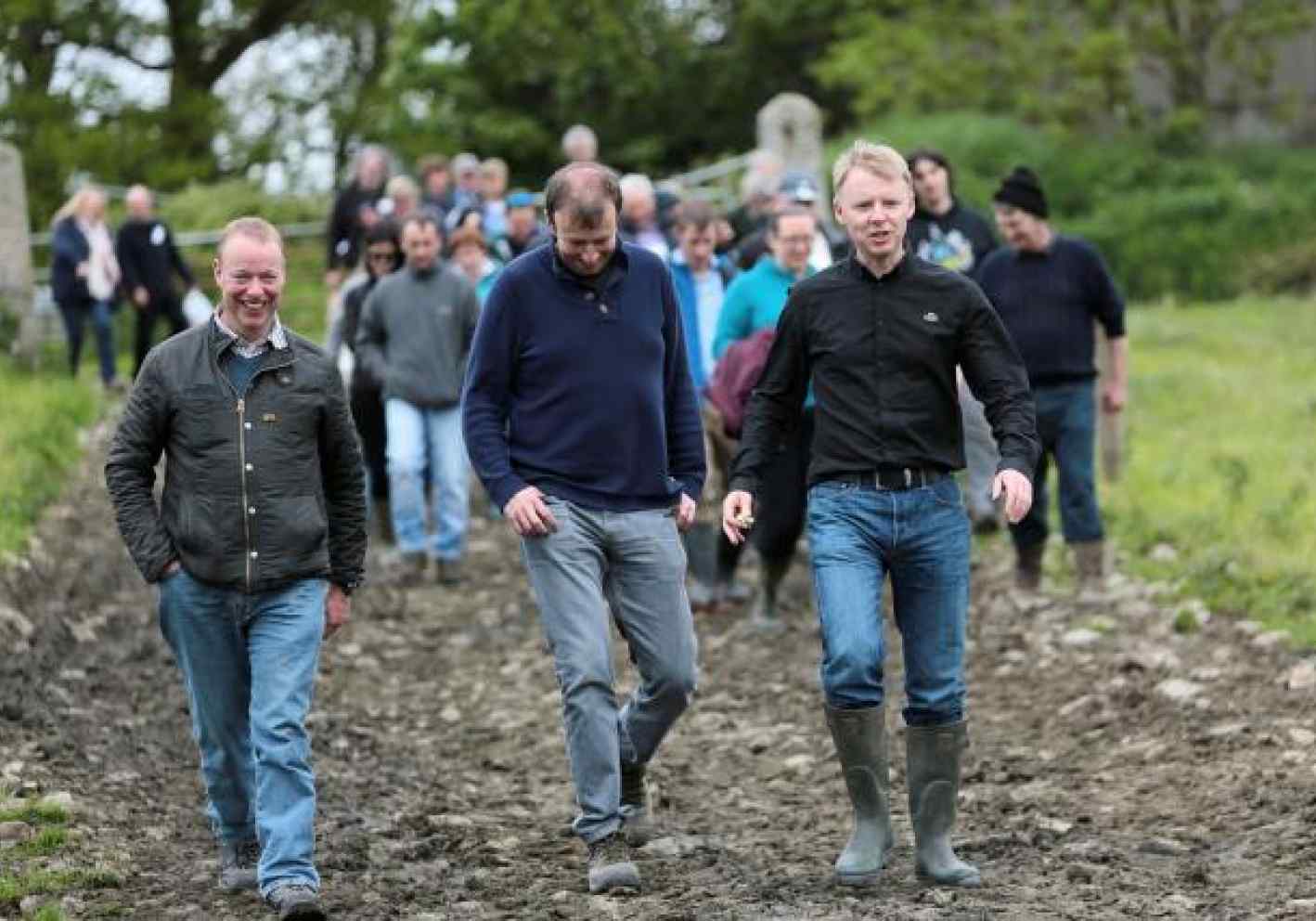 So finally as we are coming to the end of the IRD DuhallowLIFE project and the beginning of a new EU LIFE project; RaptorLIFE. To celebrate these two momentous occasions we recently held a two day project conference in Newmarket. Co Cork.

The first day (May21st) of this two day conference marked the end of the four and half year EU LIFE project, known as DuhallowLIFE. This project, officially drawing to a close on June 23rd 2015, is carried out in partnership with Inland Fisheries Ireland and aims to protect wildlife of European importance in the Duhallow area; Freshwater Pearl Mussel, Atlantic salmon, European Otter and Kingfisher. The Irish Dipper, an aquatic bird sub-species was also included in the conservation programme on account of its uniqueness. Achievements of the project were presented and a management road map to continue and improve upon the conservation efforts was presented. This is only EU LIFE project to be led by a community development group or a non-state agency in Ireland.

The second day marked the launch of the new RaptorLIFE project. This project is not only a community led initiative but also aims to join the management of two Natura 2000 sites (an SAC and a SPA). It aims to promote the conservation of Raptor species (birds of prey such as Hen harrier, Merlin) as well as fish species (such as Atlantic salmon and Brook lamprey) in the upper Blackwater River catchment area. It is an exciting time for nature conservation.  Local people are working together in collaboration with environmental NGOs and state agencies to try and help assist in the long term conservation of important wildlife species. Wildlife that is important not just in Duhallow but in Europe. Recent thinking in nature conservation circles is to focus more and more on direct community engagement and participation. That is if we are to succeed in the conservation of not just our wildlife but also the precious resources of planet Earth which underpin our very survival!

The theme of the two day European conference was ‘Celebrating Hands On Community Participation In Nature Conservation’.

Frank Lewis of Kerry Radio chaired the first day, injecting good humour and lively discussion throughout the sessions. Included amongst the exciting line-up of speakers over the two days were, Maura Walsh CEO of IRD Duhallow. Maura welcomed everybody and outlined the role of IRD Duhallow in nature conservation and how the environment is key to sustainable communities in Rural Ireland. Michael Millane gave an overview of the role of Inland Fisheries Ireland and their involvement in LIFE projects which also include the CASIE LIFE project and MulkearLIFE. Seosamh O'Laoi, LIFE National Contact Point with the Department of Environment Community and Local Government, gave an overview and useful tips on how to prepare a LIFE project. This was followed by the Conference Keynote Speaker, author, historian and Freshwater Pearl Mussel expert John Lucey, who gave an very informative talk entitled "The Freshwater Pearl Mussel: Pearl Producer and Protected Species". John covered not only the ecology of Freshwater Pearl Mussel and issues affecting them, but also delved back into the history of Freshwater Pearl Mussel and how at one time numbers were so high that there was an jewellery industry based on their exploitation in Ireland. This industry no longer exists today however as now the pearls are worthless.

This was followed after the coffee break by a series of EU LIFE project presentations from around Europe. Marjana Hönigsfeld, Institute for Conservation of Natural Heritage, Slovenia who spoke on otter conservation in Slovenia and the need to protect them from road traffic and human disturbances including dogs!!. Diane O’Leary, West Cumbria Rivers Trust, Pearls in Peril LIFE+UK, presented on Freshwater Pearl Mussel conservation in the UK and give an very informative overview of measures being used to combat river bank erosion and the restoration of riparian area. Ruairi O’Conchúir gave a riveting presentation on the work carried out for the MulkearLIFE project and demonstrated how successful conservation work was carried out to improve lamprey fish passage throughout the river system, and also the work carried out with farmers and on invasive plant species.

Fran Igoe DuhallowLIFE project co-ordinator, outlined the background to the DuhallowLIFE project and gave examples of innovative measures developed by the project to assist farmers and conservationists to help tackle problems of livestock management near watercourses, water access, land erosion, drainage and excessive shading by riparian trees (and in places the lack of adequate native tree cover on river banks), Kieran Murphy, project scientist outlined how the project went about carrying out conservation actions to assist otters, kingfisher and Dippers and gave a comprehensive overview of the invasive plant species removal work, Nuala Riordan project officer with IRD Duhallow presented results on the public engagement and education elements of the project. Michael Twohig, IRD Duhallow Board Member and local angler gave a full and frank account of what is needed to address some of the environmental issues affecting the rivers in Duhallow. He outlined some of the work carried out by anglers in river restoration and angling promotion. He emphasised the need for us all to work together to resolve what are sometimes complex issues, showing that ultimately the resolution of environmental issues is in all of our interest. Derval Vaughan, principal of the Convent Girls National School Kanturk, gave the perspective of educators and students to the DuhallowLIFE project. She spoke on how much the children enjoyed the project, especially the nature recording activities that the children got involved in with their community. Another popular activity was the river trips to see water bugs and fish which was led by Andrew Gillespie, Mick Fanning and colleagues from Inland Fisheries Ireland. Brigid Daly, a local farmer whose family roots in the River Allow area go back to the 1700s, gave the perspective of the local farming community. She highlighted the importance of engaging the farming community every step of the way in environmental conservation. She outlined the importance of the River Allow Catchment Management Process at resolving issues in the catchment. She also spoke about how the project has brought an increased awareness amongst the farming community of the importance of the area from an environmental perspective and that areas of high nature conservation value need to be recognised and supported financially.

Dr. Donal Daly, senior scientist with the EPA outlined the concepts of Integrated Catchment Management and the new EPA initiative in this areas. He also spoke on how projects like the DuhallowLIFE project are important in helping us to find solutions to issues affecting water quality in rural Ireland. Frank Donoghue of National Parks and Wildlife Service outlined the relationship between LIFE funding and NPWS.

On Friday, talks were presented from a range of speakers, giving an overview of the challenges and rural issues affecting nature conservation. Journalist and author Paddy Woodworth chaired the sessions bringing a global perspective to the community participation theme of the project launch. Launching the RaptorLIFE project, he gave his own story of a chance, up and close, meeting with a Duhallow Sparrowhawk on his route to the event that morning. The presentations then kicked off first with Marjana Hönigsfeld, Institute for Conservation of Natural Heritage, Slovenia, who demonstrated how important it is to engage sections of society, not normally associated with nature conservation and,, how to go about doing this. In Slovenia her LIFE project (AQUAVIVA - Live Water - from Biodiversity to the Tap) used illustrated patterns and designs found in nature (diatoms and other algae) to engage the public through innovative and attractive clothing design and public displays.  Barry O’Donoghue of the NPWS then gave an overview of Hen harrier ecology and the issues facing them in Duhallow. Ominously these fascinating raptors have undergone a serious decline, with an 80% loss in breeding territory in recent years. Lorcan O’Toole of the Golden Eagle Trust gave a considered analysis of rural human population decline in upland areas and proposed a collaboration between nature conservation and rural development, to help bring back these rural communities. Brin McDonnell of the Duhallow Birdwatch Group, gave detailed accounts of what a local ornithological NGO and a rural development company can do, by working together to improve nature conservation. He gave an account of the work done for Barn owls, Swifts and a range of other species including the preliminary projects coordinated by the Duhallow Environmental Working Group on Hen harriers. Drawing from his experience with the RSPB in Red kite conservation in the UK and other programmes, Brin gave a can do perspective on nature conservation, highlighting the need for everyone to work together in the true spirit of nature conservation.

Eileen Linehan and Fran Igoe gave an overview of the RaptorLIFE project which will work over the next 4.5 years to try and improve the conservation of Hen harrier, Merlin, Brook lamprey and Atlantic salmon. Stakeholders, Bernard Burke of Coillte gave an account of semi-stage agencies collaboration with IRD Duhallow and their role in the RaptorLIFE. Gill Wyman of Cork Nature Network gave an account of the new nature conservation organisation on how it is linking into the project. Cathy Fisher, biodiversity officer with Kerry Co Council gave a presentation on the role of Kerry Co Council. Other stakeholders that will be involved in the project include Birdwatch Ireland, Cork Co Council, Angling clubs, Mary Immaculate University, IFA and Irish Farmers with Designated Lands.

The conference then moved outdoors for the afternoon for a field site visit to the farm of Tony Ahern, who owns a dairy farm just outside of Kanturk town. First we all got fed at the Dalua (Aherns outdoor) farm cafe and then onto the field trip. The visit took in examples of alternative cattle drinking options (pasture pumps and solar pumps), rainwater harvesting, a constructed (dry) wetland for receiving soiled water from the main passage, examples of river bank restoration work and a mobile cattle watering unit. Tony raise a few laughs when he showed delegates a cartoon outlining how the LIFE team cajoled him into getting behind nature conservation (and never looking back!) on his farm, which is now regularly visited by people with an interest in riparian and water management on farms near rivers. Plenty of discussion took place along the river walk, with discussions between the DuhallowLIFE team and PIP UK on solar pannel technology and suppliers of the technology to how best to carry out river bank restoration and planning. The sun shone down on what was a wonderful day and as we got back to Newmarket we were sad to see out vistors go and that it was all over so quickly.

IRD Duhallow would like to thank all of those who attended, helped out on the day and during the lead up to the conference. We wish to thank the speakers, chairpersons, bus drivers and audiovisual support as well and the local community for supporting the projects. A big thanks to Tony Ahern, local landowner who facilitated the field trip onto his land. And also all of those who worked behind the scenes, the designers and printers, people organising the food and refreshments, providing music and the marquee. We look forward to working collaboratively with the community, eNGOs and the state agencies on this new LIFE project. If you are interested in getting involved please contact us at 02960633 or email duhallow@eircom.net.

This DuhallowLIFE and RaptorLIFE projects are supported through the LIFE financial instrument of the European Community.

A Goujon or a Gudgeon

Only the size of a chicken goujon, this Gudgeon (Gobio ...