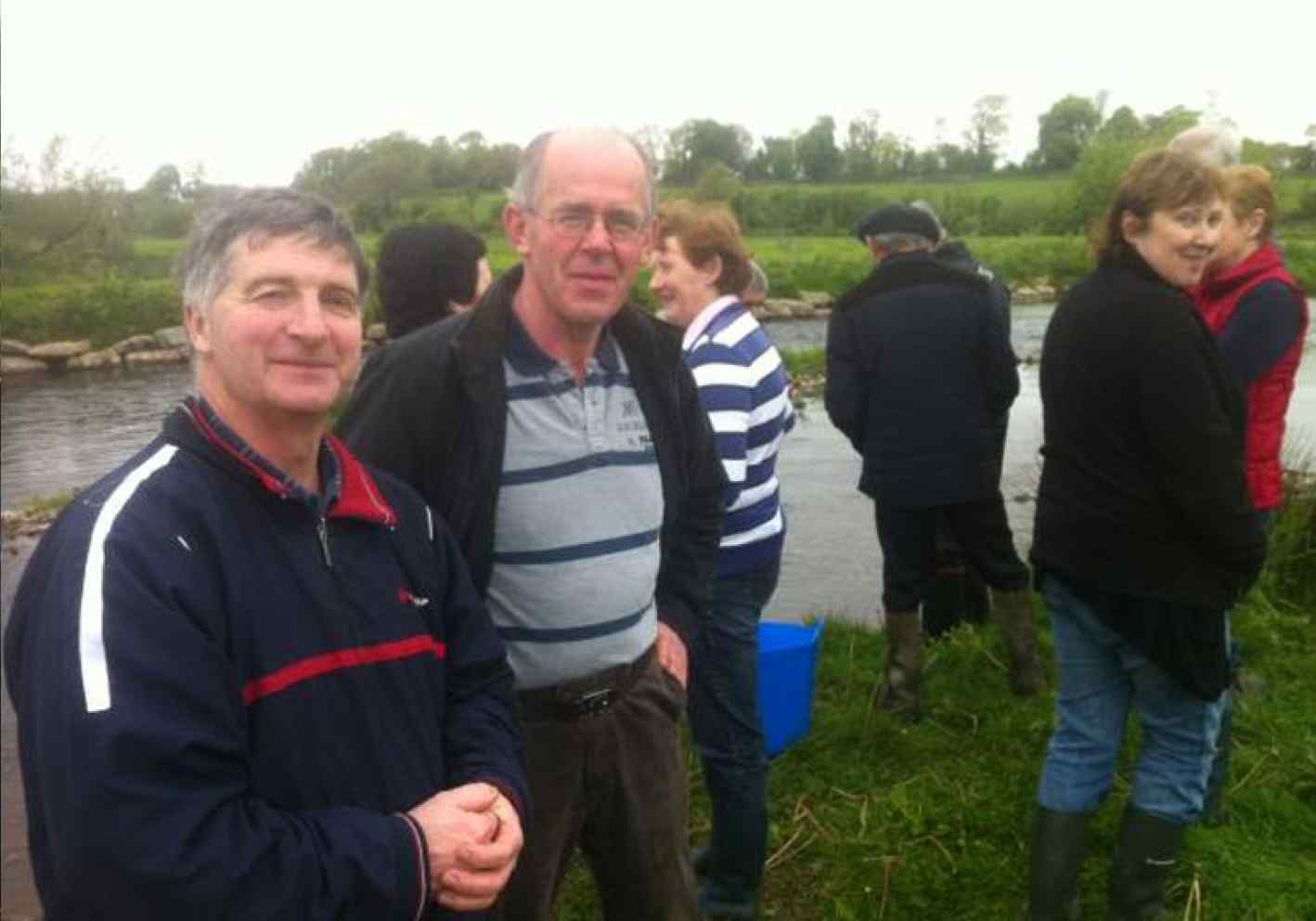 Last Wednesday and  hot on the heels of our very successful launch of the River Allow Catchment management initiative, the IRD Duhallow LIFE+ project hosted a day long meeting for landowners. This meeting was to bring farmers up to speed on the project todate and also to inform them on the River Allow Catchment management initiative. As with the previous Wednesday, the weather couldn't have been kinder,  providing for a very pleasant field trip to two project sites. Here the local farmers were given a first hand demonstration of the projects actions including river bank revetment techniques, flood friendly fencing, tree planting and invasive species removal near our demonstration site in Kanturk. The visit to the second site included a demonstration of our new silt trap design, regular riparian fencing and pasture pumps as an alternative to direct cattle access to the river. A lively discussion took place around the future of farming in disadvantaged areas and land prone to flooding. There was general agreement that a more holistic approach is needed where farmers are rewarded  more effectively for the ecosystem services they provide. Lively banter also took place about the best way to position a pasture pump.

Following the field trip the group returned to IRD Duhallow for lunch and an update from Fran on the projects progress and where works are intended this summer. The new and additional delays in the planning process regarding proactive conservation management in Natura 2000 sites was also outlined. Things really livened up when a question was posed from the audience about the new announcement by The Minister for Agriculture, Food and the Marine, Simon Coveney TD, regarding the support measures to be included in the new Rural Development Programme (RDP), 2014-2020. The total amount available for RDP schemes to over €4billion in the period to 2020.

The allocation will fund two flagship schemes was particularly welcomed by the RIver Allow farming commmunity– namely an expansion of the Burren Farming for Conservation Scheme and new projects in Freshwater Pearl Mussel Catchment areas. Members present in the audience asked whether the River Allow should qualify for the latter and made the argument that on account of the considerable environmental work that has already been undertaken by landowners in partnership with the LIFE project and IRD Duhallow orher encironmental initiatives under the LEADER programme and voluntary schemes, that this should be recognised and developed further. It was pointed out that every single school in the catchment has been visited by the LIFE project and the children have participated in the wildlife species recording and mapping, not to mention all of the other public awareness raising to date.  Awareness of the Freshwater Pearl Mussel is particularly high in the catchment. Additionally now that the River Allow Catchment Management initiative has been set up with such a great stakeholder response, it is important to build on this momentum and really drive conservation home in the catchment. Targeted funding for farmers would reward good environmental stewardship and help secure  Freshwater Pearl Mussel in this important habitat for the species in the River Blackwater Special Area of Conservation. IRD Duhallow agrees!