Article in the Corkman 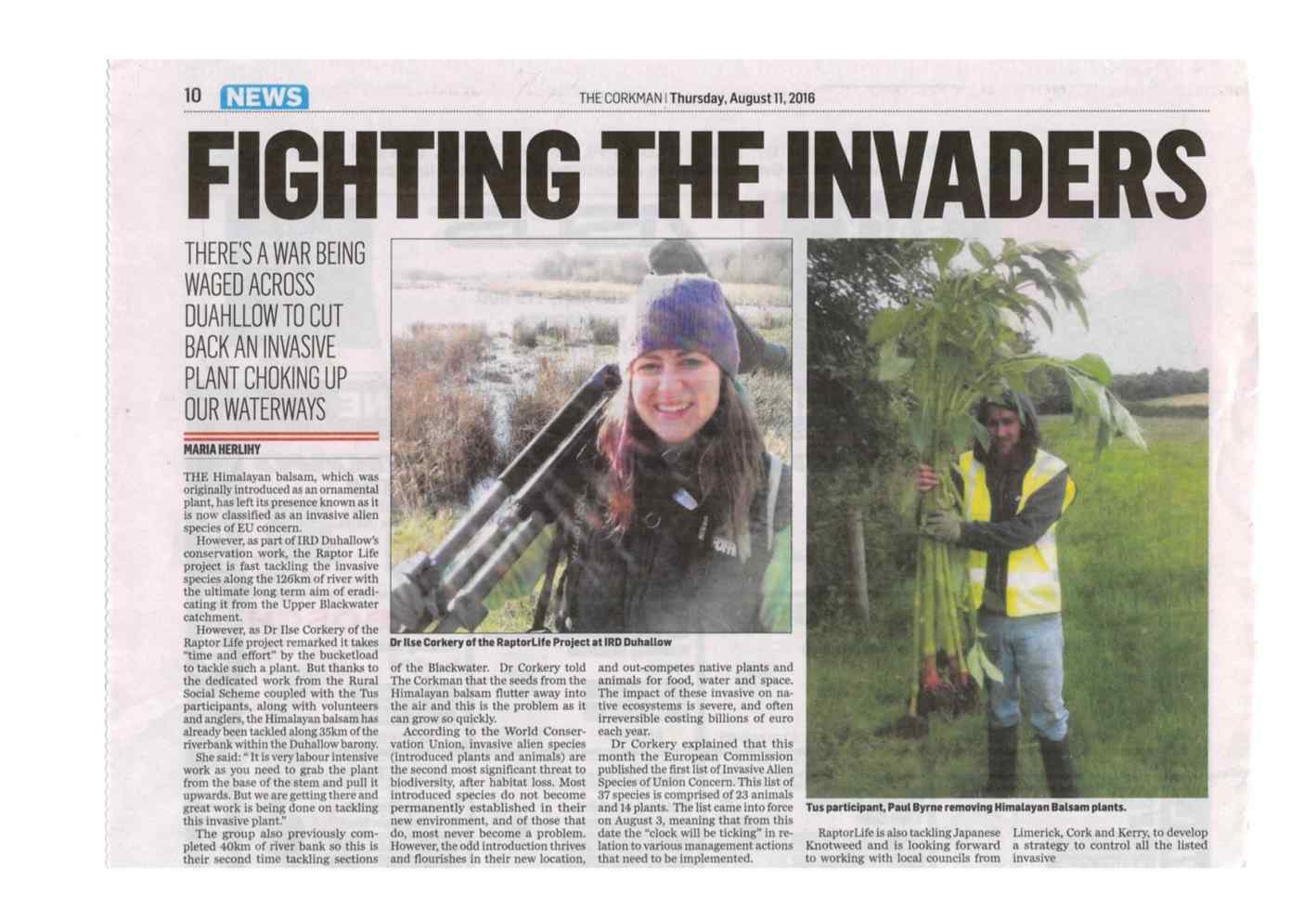 The Himalayan balsam, which was originally introduced as an ornamental plant has left its presence known as it is now classified as an invasive alien species of EU concern.

However as part of IRD Duhallow’s conservation work, the RaptorLIFE project is fast tackling the invasive species along the 126 kilometres of river, with the ultimate long term aim of eradicating it from the Upper Blackwater Catchment.

However, as Dr Ilse Corkery of the RaptorLIFE project remarked it takes “time and effort” by the bucketload to tackle such a plant. But thanks to the dedicated work from the Rural Social Scheme coupled with the Tús participants, along with volunteers and anglers, the Himalayan balsam has already been tackled along 35km of riverbank within the Duhallow Barony. She said: “It is very labour intensive work as you need to grab the plant from the base of the stem and pull it upwards. But we are getting there and great work is being done on tackling this invasive plant”.

The group also previously completed 40km of river bank so this is their second time tackling sections of the Blackwater. Dr Corkery told The Corkman that the seeds from the Himalayan balsam flutter away into the air and this is the problem as it can grow so quickly.

According to the World Conservation Union, invasive alien species (introduced plants and animals) are the second most significant threat to biodiversity, after habitat loss. Most introduced species do not become permanently established in their new environment, and of those that do, most never become a problem. However, the odd introduction thrives and flourishes in their new location, and out-competes native plants and animals for food, water and space. The impact of these invasives on native ecosystems is severe, and often irreversible costing billions of euro each year.

Dr Corkery explained that this month the European Commission published the first list of Invasive Alien Species of Union Concern. This list of 37 species is comprised of 23 animals and 14 plants. The list will come into force on August 3rd, meaning that from this date the ‘clock will be ticking’ in relation to various management actions that need to be implemented.

RaptorLife is also tackling Japanese Knotweed and is looking forward to working with local councils from Limerick, Cork and Kerry, to develop a strategy to control all the listed invasive plants and animals in the Duhallow area.