Return of the Skydancer 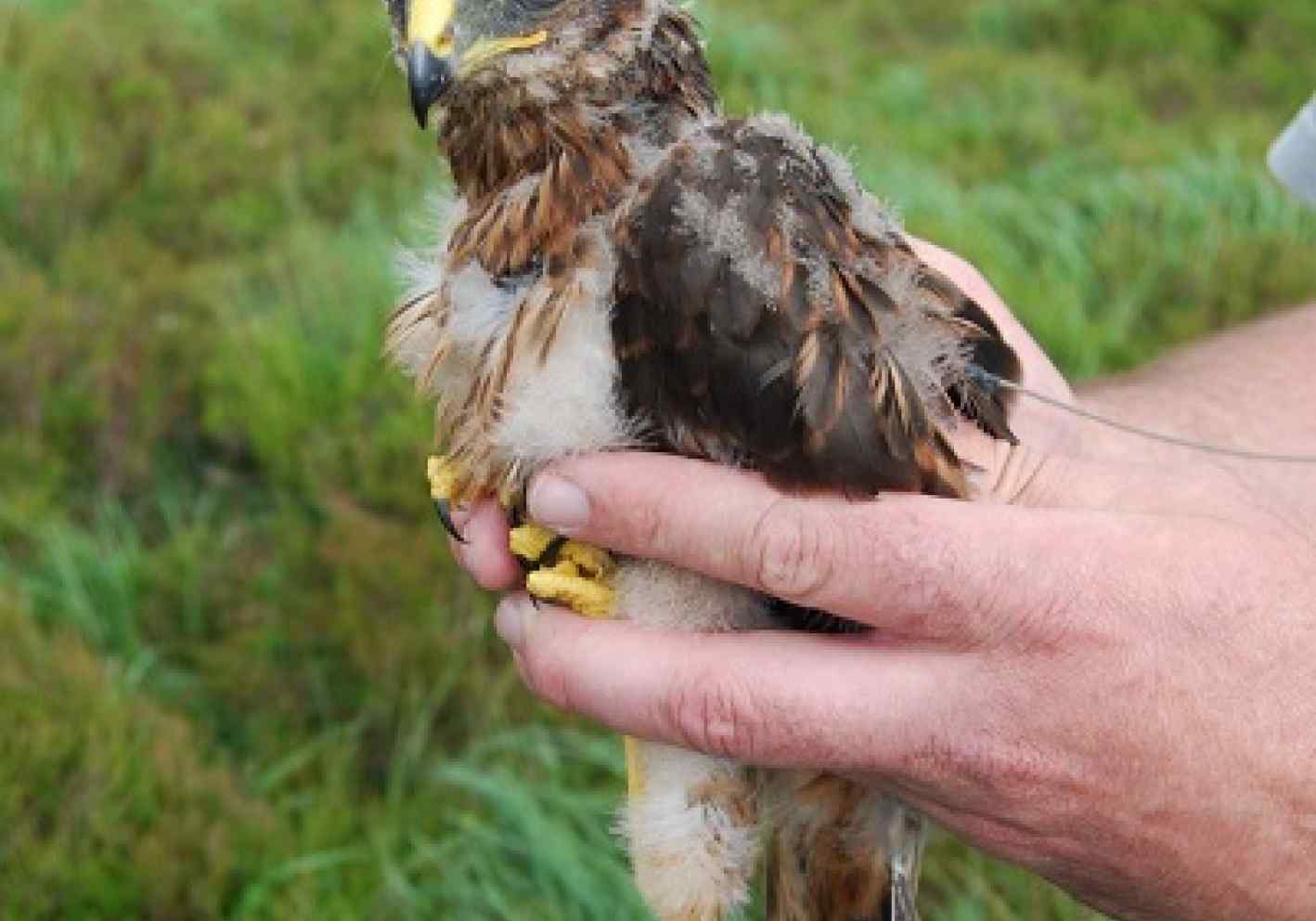 Satellite tagged hen harrier returns to nest in Kerry
Hen harriers are one of Ireland’s threatened birds of prey and an icon of the Irish uplands. In springtime the ‘skydancing’ of the ‘white hawk’ as the male hen harrier is sometimes known as locally is one of the most awe-inspiring sights in nature, the male rising to sometimes great heights before plummeting to the ground in a rolling display before rising and falling again. In recent years harriers have disappeared from some of their former strongholds or have fallen in numbers within some of the remaining core areas, so much so that few people now get to see the ‘skydancer’ while many areas are not producing enough chicks to maintain populations. During the 2015 national survey only 108-157 pairs were found in the whole of the Republic of Ireland, an 18% decrease in the number of pairs since 2005.
One of the least known aspects of hen harrier ecology is where birds go once they leave the breeding grounds, how many survive their first year, and where and when they return to nest. To try and answer some of these important conservation questions a programme of satellite tagging was initiated in 2016 by the National Parks and Wildlife Service and the EU funded RaptorLife project at IRD Duhallow based in Newmarket, Co. Cork. Satellite tags are attached to hen harrier chicks just before they leave the nest and will, we hope, provide real insights into harrier’s lifestyle. Birds have now been tagged in the Mullaghareirk Mountains in North Cork and East Kerry, the Ballyhouras in North Cork and South Limerick, the Knockmealdowns in Waterford and the Slieve Blooms in Laois and Offaly.
We now know that young harriers spend up to a month on the breeding grounds after they leave the nest although their parents disperse away much sooner. Birds have dispersed as far as the north Antrim coast but to date no birds have emigrated out of Ireland. Although some male hen harriers are known to breed in their first year (young males differ in their plumage from older birds) after hatching it has never been proven that female harriers could nest in their first year. However this year a female hatched at a nest in the Mullaghareirks north of Ballydesmond, Co. Cork, in 2017 returned to breed at a site in east Kerry.
IRD Duhallow’s RaptorLife project scientist Dr. Allan Mee said “We were excited to see where this female would spend the summer but we weren’t expecting her to nest this year. Although harriers typically return to breed in late March and early April this female did not leave her wintering grounds on the Wexford coast until well in to April arriving at her breeding site on 29 April. Within two weeks however she had not only found a mate but had laid a clutch of 4/5 eggs. By late June the pair were feeding their young typical prey items such as small birds like meadow pipit. The unusually hot and dry weather posed a real problem for the nesting pair. Birds of prey get all their water needs from their prey so as well as dehydration overheating was a real life and death issue for the chicks. Despite this the nest progressed well until the chick were 3-4 weeks old. With just days to go until the young would themselves take their first flight the nest was predated by a fox, an indication of the pressures that ground nesting birds like harriers face in the race to raise chicks in the wild. Within a day of losing her brood the satellite tagged female had travelled some 110 kilometres east to Slievenamon in south-east Tipperary! Although the loss of this brood was disappointing the RaptorLife project team were delighted to see this female return to breed in her first year”.
Major threats to breeding hen harriers are large-scale afforestation, increased industrial scale windfarms in the uplands, human disturbance and land use such as turf cutting. Although hen harriers readily take to young conifer plantations to nest, conifer forests can only be used for a few years before the forest canopy closes over (at 10-12 years). Therefore large parts of the uplands become unusable to harriers between 10-40 years before the crop is harvested and replanted. Traditionally hen harriers nested primarily in heather moorland or more often on blanket bog in the south-west of Ireland. Six Special Protection Areas (SPAs) have been designated for hen harriers in Ireland including the Stacks to Mullaghareirks, Mount Eagle and West Limerick Hills. However, despite this, declines in some of the SPAs have been even greater than in the population as whole (ie., -38% in the Stacks to Mullaghareirks since 2005). Conservation action is urgently needed to slow the current rate of decline. A Threat Response Plan which aims to form a conservation framework for hen harriers has been prepared and is to be published soon by the Department of Arts, Culture and Heritage. An SPA wide agri-environment scheme (Hen Harrier Project) is now up and running and will provide payments for farmers in SPAs based on the results of measures carried out to benefit hen harriers.
Over the five years of its lifetime the RaptorLife project has been working with the farming community in Duhallow to deliver benefits for hen harriers and the wider ecosystem along the upper Blackwater catchment. It is hoped that working in tandem with farmers on the ground that both farming and wildlife will have a positive future in the Duhallow area.